Today was a really lovely day.

I bought a headphone splitter so that Colin and I could watch a movies together on my laptop. We always used to watch Simpsons episodes when we went to bed so it could sort of lull us to sleep. This is one of the parts of our togetherness that I have missed. The last few times I have visited, particularly when he has had his pain meds, he has slept for about an hour, sometimes 2, and we have also slept together – him on his bed, and me with my face on a pillow on his table. This has also been a special thing as we hold hands and sleep.

Today, we both fell asleep while watching some new Simpsons episodes, and it felt really good to be in a familiar space again.

Colin showed me that he can now move both his feet just a very little, sort of at the ankle, and a toe, and he is absolutely determined that he is going to beat this thing, and regain all his function. I know that we have to be careful and not expect too much, but he is making such great strides, it is difficult not to be overjoyed at every new flicker of movement and sort of extrapolate that to a happy ending. Colin and I chatted about the accident and he really spoke to me about exactly what he felt every moment. He said he was sort of narrating the accident to himself, and went from “oh no you didn’t just bump into the back of me”, to “OK, that is bad, and this is going to be a very bad outcome”, to “I can’t breathe, and this is how I am going to die”. He said that he really thought it was going to be game over and all he could think was that he loved us all. We had a little cry together and sort of re-affirmed how glad we are to be together and have each other and it was a really special moment, despite the tears. I think this had been an awful and traumatic experience for Colin, and every day he has to wake up and realise it is not a dream. He has to face each day without being able to do anything for himself. Perhaps in time, he will be able to do many things independently, but I can’t imagine how difficult it is for him. I am lucky to have such a special man who loves us all more than himself, and that I have the opportunity to love him while he is still here. Not everyone gets that opportunity, and many have so many awful tragedies that end so much worse.

We also had a bit of an sort of emergency today. I was helping Colin feed himself lunch and he was chatting to the doc. He started choking and gagging, and I didn’t know what to do. I helped him with assisted coughing, and the Doc helped as well, but I really thought it was going to be a serious issue which would end in him aspirating. He seems to have had some rumbling in his breathing all day since that, even when I suctioned him, and I did tell the night staff, but I am a bit worried about him. I am sure it is all fine, but let’s see how it goes – I will go see him early again tomorrow to make sure he is ok.

The physio said he has to spend at least an hour each day of the long weekend (4 days) in his chair. We had our first wheel-chair walk together and we even went outside for a minute so Colin could remember what the sun looks like 😀 He says that he is feeling so much better and sitting in the chair is no longer a torture, and we were able to go for a stroll along the corridors. 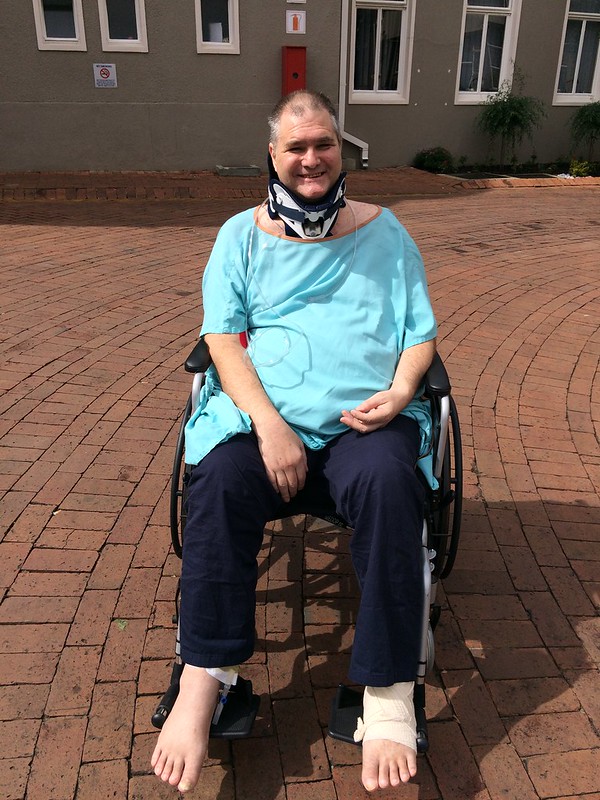 Oh, and the most important thing – when they put him in the chair it was about 10:30. He has been wanting to go off the oxygen so he can get on with the process of getting rid of the trachy eventually, and this is one of the steps. He was off completely when he left the ICU to come to rehab, but he went back on. We don’t really know why, but the ambulance put it on him and it sort of stayed from then. He has been going down, and it was on 1 a few days ago. Last night and this morning it was on a half, but when they put him into the chair, they didn’t have a portable one for him so they left it off. He said he was absolutely fine, so we went on our walk like that. They came and took his vitals about an hour later when he was back in bed, and his oxygen saturation was 94% so they decided to leave it off. Another 3 or 4 hours later when they took it again, it was on 93, so now he is officially off the oxygen. He is very pleased.

My love – you are the best man I know, and you continue to impress me with your positivity, your hard work, and your tenacity. I love you so much, and can’t wait to see you again soon. Your cone should come off in the next 11 days or so, and your first home visit is also coming closer.