Colin stood up in the frame for the first time. He cannot stand up, or lift himself, or use his legs, but he was able to tolerate being in a standing position with his weight on his legs while being strapped in. This is a very good thing because the weight on the legs has many positive effects, including stretching the legs and ankles fully, potentially reduced spasms due to the shifted muscles and weight, and many more I can’t remember.

Here you can see his bum is strapped into the fixture, and his feet are also strapped and unable to move: 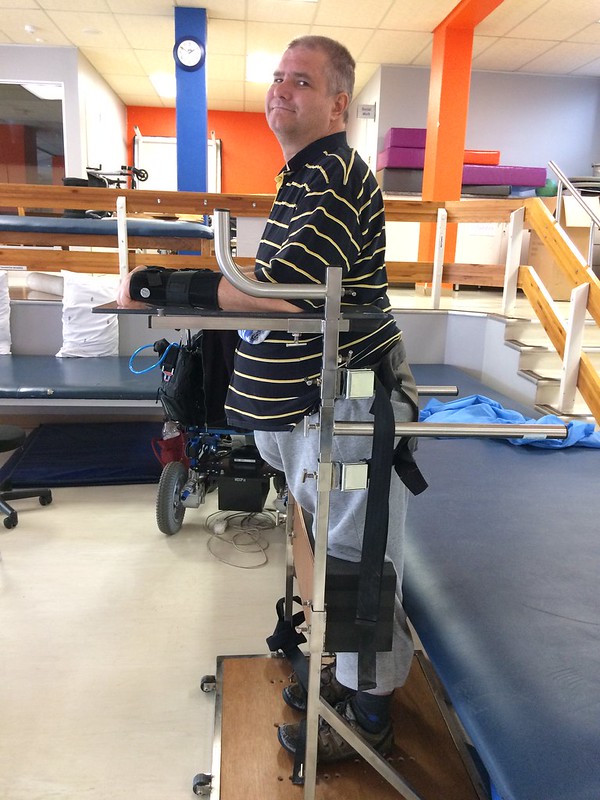 Here he is standing with Bafana, having a Titanic moment: 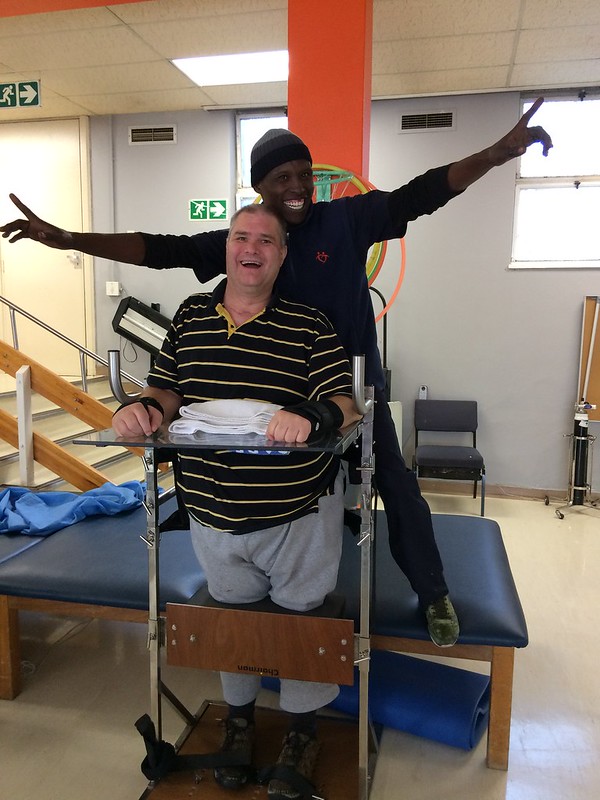 Later on he did some OT where he moved his arms on a machine that essentially counts the number of movements as well as having a marker that if you don’t reach it, it doesn’t count a rep. This is very exciting because up til now he has had very little ability in his right arm. It is still very weak, but there is clearly potential:

Here is another video where he is pulling faces and moving his arm while standing – clearly he was not in distress:

I also did some more nursing stuff. The bowel regime for quads is very invasive, but it is a fact of life now. This week Colin graduated from suppositories to being digitally stimulated. He needs to go every 2 days, and so far he has done well on the training, but this next phase is more unpleasant for him than the previous. Now, every two days, instead of having a suppository pushed up his bum, he has to have a finger put in, and the finger then has to sort of move around and stimulate the reflex for the bowel to empty itself.

Since watch one, do one, teach one has worked well before for other things I have had to learn, we did it with this as well. I watched one on Monday night, and tonight it was my turn. Once you get over the initial squeamish feeling and indignity of the matter, it is actually quite simple. If there is no “bomb” or “BM” or (let’s use the word) poo after 20 minutes then you have to use a suppository. But since his bowel has essentially been trained, it should be simple and straight forward, and it was tonight.

I also learned a clever trick of wearing 2 pairs of gloves at once, which allows you to sort of take one pair off when it is full, but you still have a glove on for cleaning – so it is more efficient.

So much progress, and so much learning.

Today I am grateful for nurses and learning and teaching, and practice. And for Colin who just lets me try all the things I will need to do going forward, and encourages me all the way.