Today, Colin is still on the ventilator, but it is not on. It will kick in if he stops breathing, but they are weaning him off and he will be able to breathe without it very soon, I am sure.

My Dad came today, and was able to correct me – he is at about a 30 degree angle. 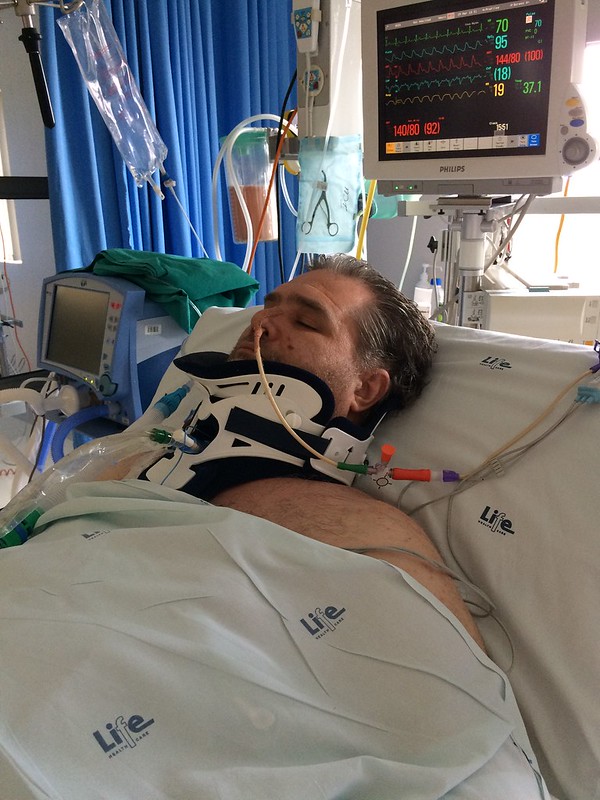 It is really tough for him, but he seems a little more positive today, and is looking better. The swelling on his neck has come down quite a lot, and he was able to move his head quite a lot. He moved his head quite far to the side so I could scratch his neck. I imagine they haven’t tightened the neck brace since they put it on because I could fit 2 fingers into the side when Colin moved so I could gently scratch him. It was strange because I could feel the wound from where they did the stabilisation, and sort of really did it as gently as possible trying not hurt him; but he seems to love the scritches.

I am struggling with the visiting thing. I want to see him 3 times a day which is what the ICU allows, but it is just far too tiring to travel all the way, specially at the 3pm time when the traffic means we take an hour and half (or more) each way. Unfortunately Morgan doesn’t have a license, so it falls on me alone. I know Colin would want me to look after myself, and not go more than once a day, but I also know that he wants to see me as much as possible. It must be too awful and boring to not have any music, not TV, no anything. He said he didn’t want me to bring music as he won’t be able to indicate when he wants it to stop.

I have managed to get some news short cuts, and that seems to help him a lot. I imagine he feels totally out of it and wants to know what is going on out here.

He seems to have some coughing or gagging that comes upon him which looks painful and scary. I have learned that I will need to keep an eye to do suction regularly, which will help him. although when they put the suction on and stick that long pipe into his lungs it looks to painful. He says it is not painful butt more really uncomfortable. That is am improvement on how it was the first time I saw it. I have to believe that it is due to so much swelling coming down. His neck and face seem much less swollen.

Oh Colin. I sit here desperately wanting to make everything better for you. Please come home soon. I am not complete without you.