Differences between being a quadriplegic or a paraplegic

People are not always aware of the differences between the terms paraplegic, quadriplegic, and tetraplegic. Sometimes, even medical professions who are not directly involved with spinal cord injury are not always clear.

Here is a great article that explains the difference very well:

The fact that Colin has a little movement in his legs, a toe or two, and bum sometimes confuses people. He is not a paraplegic. He is a quadriplegic with some recovered movement in his wrists, thumbs and fingers, arms, and certain parts of his legs and feet. He has very little strength in his hands or arms, but we hope for continued improvement.

It is unlikely that he will ever walk, but we still hope for increased strength and movement in his arms, wrists, hands and even fingers and thumbs.

Although every injury is different, here is a picture that shows the basic levels of injury as they equate to function / loss of function: 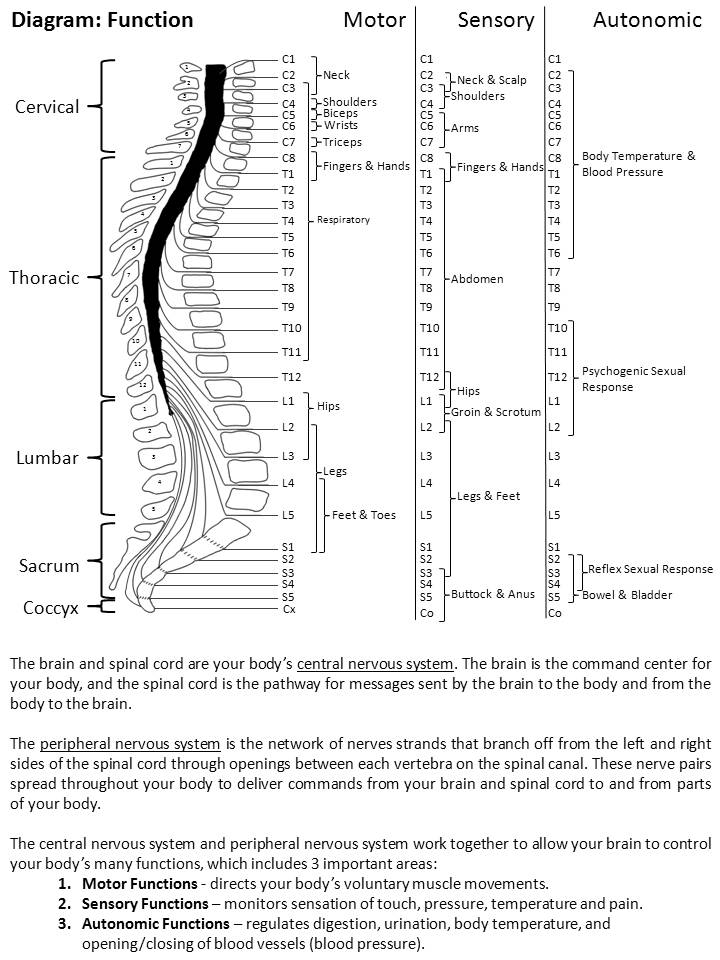 It is also interesting to note that injury can normally manifest two up or two down from the actual injury level. Colin’s injury was at his C5. This means that we are extremely lucky because he is showing recovery and function from two down. He could have only had function from two up – which would have been far worse. Initially, after the stress of the accident and then the surgery, Colin’s lungs needed assistance and he was on a ventilator for a short while. He was quickly able to breathe on his own, and although not fully functional, his diaphragm was strong enough to allow him to avoid any desperate measures.

It is interesting to note that the fingers and thumb fall into 3 different cervical levels. It is possible that a quad may have no wrist or finger function. Wea re lucky that Colin seems to have recovered some thumb and forefinger function, and we hope it will continue to strengthen. His arms also have function returning, but it is worth noting that his strength is lacking.

Although he works hard at his recovery by doing his physio and practicing using his muscles, it is not possible to know how much strength and function will ultimately return.

At this stage, we have surpassed all initial predictions, and we hope to continue to beat the odds.

Have a lovely day, and be safe out there. The roads are full of idiots.