My hubby was involved in a serious car accident on Friday morning, on his way to work. That is our ground zero. Today, being Sunday, is day 2.

I initially intended this blog to be a site for my creative endeavours, but it would appear that it is the tool I will use to keep my sanity. Due to the significant spinal injury Colin has received, we don’t know yet what the extent of the damage will be, and it is a waiting game. He had 360 degree stabillisation surgery on his C5 yesterday, and he is still in an induced coma, on a ventilator. I was never good at waiting, and I am going mad having to wait til the is strong enough to be woken, and until they can assess his movement ability.

We will have been married for 7 years on March the 27th, and as far as I am concerned, we are still newly-weds. Also, having lost his first wife to a brain tumour, Colin is hyper-aware of the value of second chances, and never lets a day go by without telling me he loves me. Even when he traveled for work, we would communicate all day long vie Skype, WhatsApp, Viber, Telegram, etc; and I am struggling not being able to communicate with him.

He was awake on day 0 and I did see him briefly on day 1 just before he went into surgery, but we didn’t get enough of a chance to really talk. He was unable to move, and talking was difficult for him. He chatted away to me even though it was painful, but somehow you are never prepared for something like that.

I do understand why they have him in a coma, and all the reasons for having him on the ventilator, but I selfishly want him back, NOW. I want to chat to him, to know the outcome of everything, NOW!

I am overwhelmed by the support I have received from my friends, especially my Scrapping Group (Denise, Ansie, Alet, Christine, Kara, Cheryal, Claire, and Venita), and the family who have rallied around us. I am overwhelmed by the kindness and patience my Dad has shown me – allowing me to just vent and swear and shout and cry and throw tantrums – he is totally amazing.

From the little information I have, it seems that Colin was rammed from behind by a driver who fled the scene, and as far as I know, there was a witness, but no one seems to have her details. Colin did have a dash-cam, but in thew few hours between rushing to the hospital and going to the tow yard, it had been stolen, and any evidence gone as well. It is frustrating, and I have an anger that I can’t quite seem to process as a result, but there is nothing I can do. When he was rammed from behind, he hit the barrier on the side of the highway, and then the car flipped and rolled. He hit his head against the roof as it struck the ground, and he said he felt all the fight go out of him at that moment. He said he thought the airbag was lying next to his head, and then realised it was both his arms just hanging next to him. He also said that he was hanging from the seat belt and could feel himself losing consciousness because he couldn’t get any air. We are really lucky because he says that someone was there immediately and despite the anti-smash and grab film on the windows, somehow managed to get to him and cut the seatbelt off. Colin says that the man who tried to kick the window out was having a tough time. I guess the smash and grab film really does its job. He says someone must know who these doors work and tried to open it by clicking the button on the handle and they were able to get him out.

The paramedic team (specifically, Tannith) from ER24 was amazing. There are no words to express our gratitude and thanks to these people who save us and our loved ones. I will be forever grateful to them.

He was taken to Fourways Life Hopsital and so far, every member of the team has been wonderful.

This is what is left of his car: 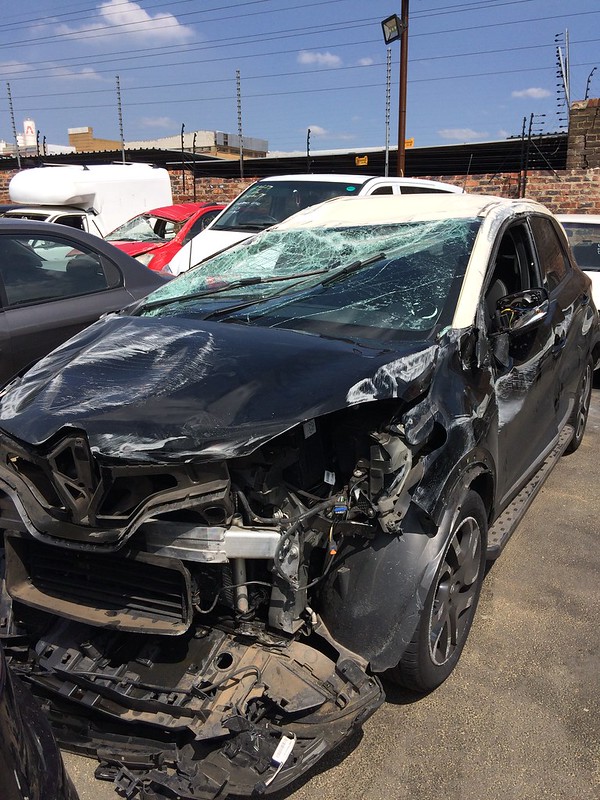 This is my sweet Lumpy this morning: 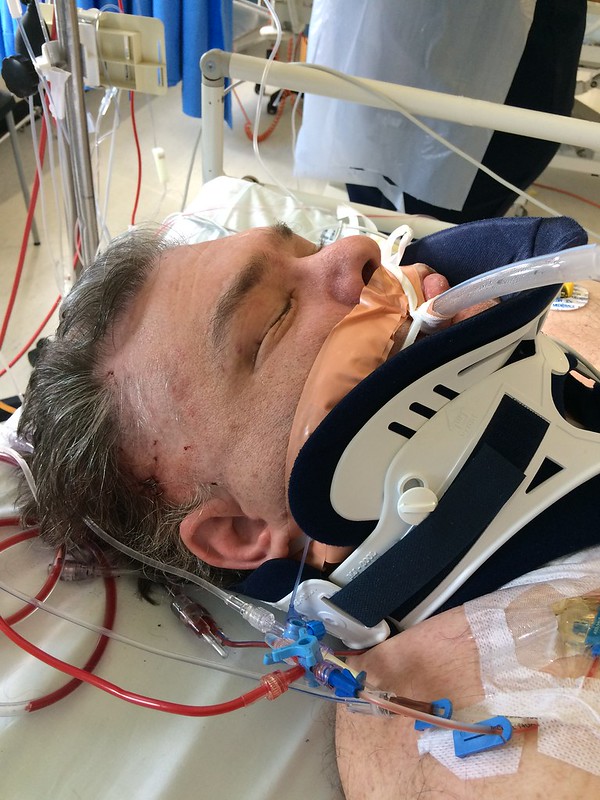 I really hope to be able to get back to focusing on normal things and being able to create and share here, but for now – I will be updating on our progress.

Today I am grateful for my family and friends. They are amazing, and I wouldn’t be able to do this without them. Thank you all. <3