Today was an absolutely brilliant day, all around.

I didn’t go see him yesterday, and I missed him a lot, but there was just too much to do, and I also needed a break.

When I arrived this morning, he waited for me to come close, as usual, and then whispered “I have a surprise for you”. He then started speaking. In a perfectly audible voice. 😀

It takes some effort, and his mouth gets dry if he talks a lot, but he is so much happier now that he can say what he needs.

I also shaved him again today – I am getting better. Not good yet, but better. Here is the pic of him just after the shave: 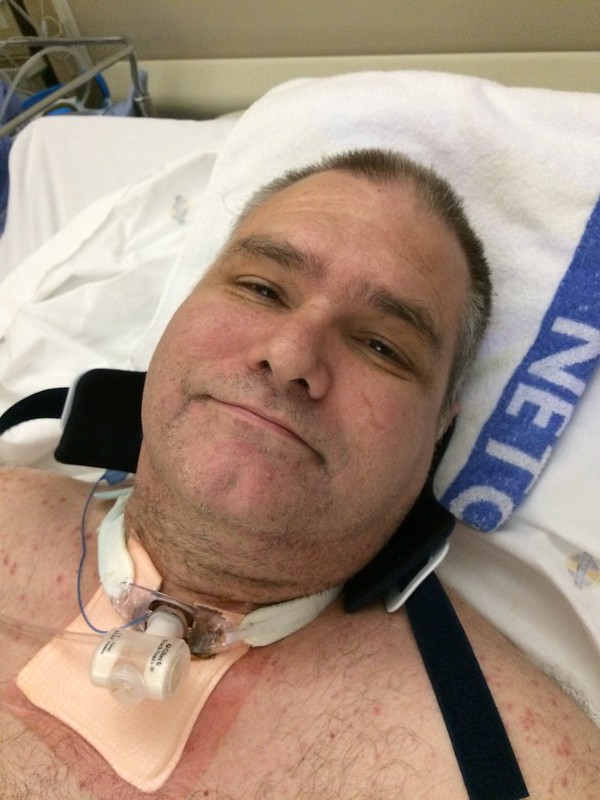 Still a few spots here and there that I missed, but it is difficult to get the angle right – I am so nervous of going too close to the trachy, and I still don’t really know how much pressure I can put on the skin, how fast to drag the blade, etc. But getting there.

Weekends are a bit different – it is sort of more relaxed, and people sleep more. A lot of the people also go home for the weekend which is something we can look forward to as well. Not anytime soon, but it will happen. I also did his suctioning without supervision today, and on Thursday – it is easy enough when you know how to do it properly, and get over the thought that you are hurting people when you do it. He is on nebs again – still has a lot og fairly thick mucus that is difficult to suck up unless loosened with the nebs, but if it is loose enough, he is able to cough some up and swallow it which is actually what we are aiming for. I can help him with assisted coughing, and I am feeling very proud that I am learning so much already. I know there is lots to come, but I think it also puts him at ease to know that I am able and willing to do it.

Debbie and Carol (his sisters) and little Duncan also came to visit. Duncan is only about 1 and a half, so they asked if he could please not come in. BUT. They wheeled Colin’s bed into a boardroom so we could all visit together. They are so helpful and willing to try. I am so impressed at the entire staff. Mr Grumpy next to Colin (who is really a rather manipulative and mean person) gives them all sorts of grief and they just smile and help him.

Today, he was supposed to wear his wrist splints for at least 2 hours, and he wore them for at least 3. They will assist with the tenodesis in the long run, and although he is not nearly strong enough to even start that, he is able to almost feed himself. I assisted him with 2 meals today, and he is gaining strength. I only had to support his elbow, and when I got the angle and level right, was able to help him by just holding his wrist underneath to give it support from dropping, but he was able to bring the spoon to his mouth so much better than he has in the last few days. Lunch was spaghetti bolognese which is difficult to eat at the best of times, and I seem to have fed more between his collar and neck than I got into his mouth. He registered his “disgust” with the comment: “Worst. Feeding. Ever.” HA HA HA For supper it went much better. I had sort of got the height and levels right, as well as the technique for sort of dropping the spoon into his mouth, and it was a great success. He is also eating his entire meal now, which was something they were worried about – he was sort of never hungry, and ate almost nothing, and left his lunch untouched most of the time. So many wins today.

Here is a video of Colin showing off his recovery so far, as well as a small snippet of his voice (not yet fully returned, but loud and clear).

If for some reason, it is not showing, here is the direct link to YouTube: Colin Day 29 (I am having a little trouble embedding tonight for some reason.