We have mixed news today.

He is back on the ventilator, but on the other hand, his bed is at a slight angle, and he was not able to tolerate that before. It means he is in much less pain, and his muscles are able to support him better, even with the loss of feeling / strength / moment we have at this stage. Not sure the angle, but looking at a protractor, maybe like 15 or 20 degrees.

He did spell to me that he would kill for appletiser so I asked the nurse and he could have some. She said she thought he was able to have a very small amount in a syringe into his mouth. I immediately sent my Dad down to the coffee shop (he is really such a strong and supportive man) to buy one. The look on his face when he was able to have some was lovely, and it made me so happy to see that something of the “old” him is coming back in his expression of joy at even such a simple thing as fizzy apple juice. He seemed a little more positive, and in less pain so I am ecstatic.

We managed to have a long conversation using the spelling method, but I didn’t manage to understand the last long sentence, and understandably so, he because a little irritated, (read VERY irritated), and that made me anxious. I know it is exhausting to do the spelling thing, and we need whichever day it is next week that will change the trachy to one that will allow him to speak, to come soon.

In addition to the 40 or 50ml of Appeltiser he had (the nurse was strict about how much he could have to start), he was also thirsty and the nurse gave him 2 chips of ice as well. He loves ice, and that was also a good moment.

The nurse said the doc who deals with the trachy will possibly be around today, and they will ask if he can start drinking. I believe this will also be a good improvement of his “quality of life” at this moment – and it will also give him some more independence which is always a good thing. It seems so difficult to have to reply on other people for absolutely everything, and not even be able to have a drink when your mouth is dry.

He did mention to me that he really doesn’t want visitors at the moment, but if you want to go see him, I think you can certainly go, even just for a very short time. It is exhausting for him to try communicate, but he did ask me to let people know he is not ready for visitors yet.

We hope for the weaning off the ventilator very quickly, but they put him back on it because he seems to have not rested well at all last night, and it may just be tiring.
He was able to tell me there was drama last night in the ICU, with a guy who had been shot air-lifted in and of course, it was into the bed next to him, so he didn’t really manage to get any peace with the necessary stuff going on next to him.

I had taken his toiletries because the nurse had said it would be goof to have them ready when he would be able to use them. I notice that today, for first time, they had opened the box on the new tube of toothpaste, and I know he is happy they brushed his teeth. He also asked me to help him by washing the facecloth and sort of sticking my finger into his mouth so he could clean the gunk off his tongue.

It was also Morgan’s 20th birthday this week on Tuesday, and today to try keep her life as normal as possible, she went to Gold Reef City with 2 friends. Here is a picture of her and her friends on one of the rides: 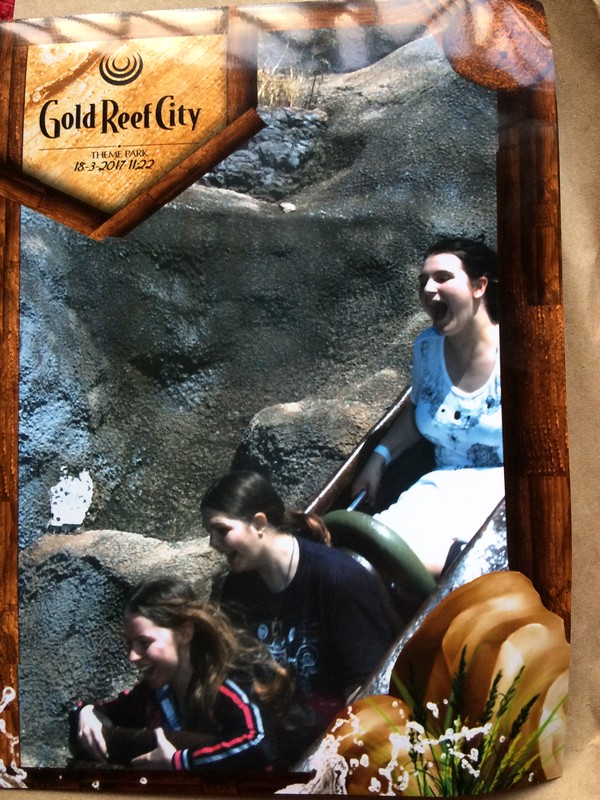 I also went to my second home today – to my scrapping and card making friends. There was a class on, and even though I didn’t book, and arrived way after the start time (just aiming to pop in and not disturb, but to say hi and just sit) – instead of just accepting that I had come to pop in – they “made” me sit down and make a card with them. 😀

I am been blessed beyond measure with the support I am receiving, and I just know we will get through this because there are just too many people on our side to let me stumble. <3 All in all, a good day, with lots of hope. Small steps...